Triggers tell SiteSpect when to make a change: to display a Variation, to measure a Metric, or to show a Site Variation, for example. Within campaigns triggers also define when a users has viewed an experiment and should therefore be counted within the campaigns analytics. While the default position for counting users is via campaign triggers this can be deactivated or modified in favor of a counting metric.

Triggers describe specific conditions such as a URL, a geographical location, or a previously defined Page Category. When a visitor comes to your website in the course of a running Campaign, SiteSpect evaluates qualities about the visitor and visit and compares them with Triggers you have specified. When the visit matches the defined Triggers, SiteSpect takes action. That action depends on where the Trigger is defined:

For A/B Campaigns, SiteSpect displays the Triggers area within the Variations section of the page.

Once expanded, the Triggers section of the page looks similar to the following figure:

When you open the Triggers drop-down, you’ll see that Triggers are divided into different groups, as shown below: EventTrack, Server Site, and Client Side. 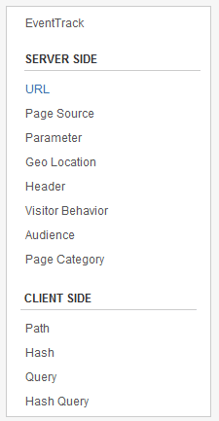 See Defining Triggers to learn how to set up Triggers.