SiteSpect supports the use of Regular Expressions (regex) for nearly all triggers and find & replace fields.

When building a variation, metric, or audience - be sure to specify "Regex" from the select list. 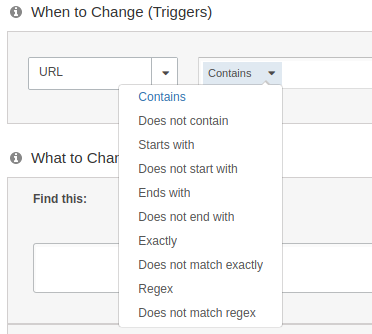 Matching in SiteSpect with regex 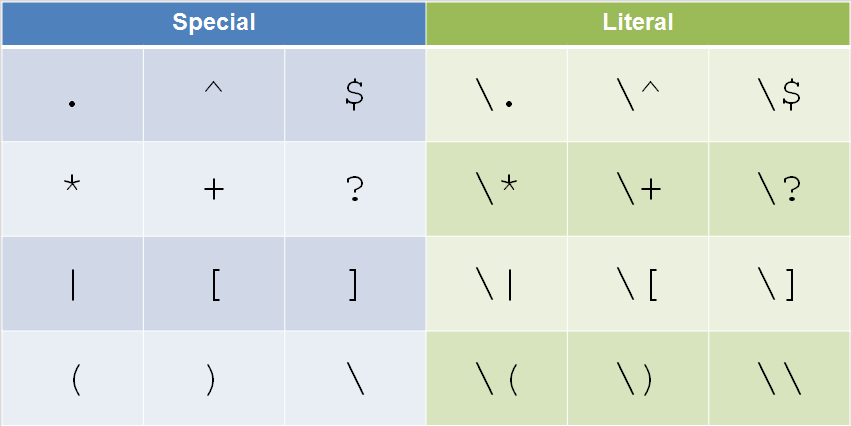 The following is probably the simplest and most common regular expression used.

The parenthesis ( ) specify that the text matched is put into a system variable called a numbered capture group. Since it is the first match, the variable is $1. Subsequent captured matches are $2, $3, etc.

In regex, there are basically two types of characters:

In general, you can perform all of the basic Find or Find and Replace functions of a standard editor's search tool in SiteSpect without learning regular expressions. Enter the literal text (the precise text you want to find, such as "Sign in" or "mysite.com") and then use the Escaper tool (ESC) within that field to automatically replace any characters that have special meanings in regex with their escaped counterparts. This means that it inserts any necessary backslashes to indicate that the character that follows the blackslash should be interpreted literally and not with its special meaning in regex.

How Do Regular Expressions Operate?

The basic regular expressions operate the same way as the Find function in standard editors like Microsoft Word or Notepad. Just like with the Find function, you ask the application to locate a string (or pattern) of text that you want to find. Sometimes, you may want to replace that text with a different string of text, but sometimes, you may want to carry out some other text manipulation task such as changing the order of your content.

For example, you can use regex to search for the text "Sign in" using the following search text: Sign in. It looks very similar to using the Find function in a text editor. You simply search for the literal text you want to find.

The advanced regex features allow you to search with more flexibility. With regex you can:

For example, to find either "Sign in" or "Sign out" you can use the regex: Sign (in|out). In regex, the pipe (|) character is a special character that means find either the part of the pattern on the left or the right side of the pipe.

Regex allows you to use many different types of wildcard searches, but the most useful one in SiteSpect is the collection of special characters .*?. Taken together, they constitute a wildcard search that finds the next pattern to the right only after finding the pattern to the left. In order to work, it must have text before and after it.

For example, the pattern Subtotal.*?\$ searches for the text "Subtotal" and then uses the wildcard to match any number of characters until it finds the next "$", a literal dollar symbol.

Alternation uses the pipe character (|) as an OR operator within the Search field. You can replace each instance of the pipe character with the word "or" such that, for example, the pattern this|that|those means "this or that or those". In another example, to match the checkout page or the cart page, use a pattern similar to the following: /(cart|checkout), which means match the "/cart" URL or the "/checkout" URL.

In regular expressions, parentheses create groupings. When you enter search text, you can create a group within parentheses to constrain the alternation character; the result is that the "or" applies only to what is within the parenthesis.

In the example, th(is|at|ose), the parenthesis surround "is|at|ose". This regex is the same as saying "this or that or those," but in a more efficient manner. When testing the search text for matches against the content, SiteSpect first looks for the "th" and then it looks for one of "is" or "at" or "ose" following the "th" that it already found. If you were trying to match this|that|those without using grouping, SiteSpect would have to start its comparison process from the beginning of the content for each member of the group. Using grouping, SiteSpect searches the content only once.

As a second example, to match the books category, movies category, or electronics category pages you might use a pattern similar to /category/(books|movies|electronics), which looks for a "/category/" directory in the URL followed by either "books", "movies", or "electronics".

Constraining alternations with groupings also works in Search & Replace. However, in a Search & Replace operation, groupings in the search text are primarily used to capture, or remember, the text matched by the pattern within the parenthesis for later use in the replacement text. Groupings and wildcards are frequently used together because they allow you to match and remember all of the text matched by the wildcard.

Capture groups are read left to right. This means that in the following expression...

(I am) (reading the (SiteSpect) user guide.)

the capture groups are numbered as follows:

For example, if you want to add the message "(not including tax)" to the subtotal of the cart page, you would search for the subtotal on a page by using the search pattern (Subtotal.*?)\$. When this pattern matches the text matched by Search.*?, it is stored in the capture group variable $1 because it is the first capture group in the search pattern. Every character matched by .*? within the capture group is stored in $1 in addition to the literal text "Subtotal". To insert the message directly before the dollar sign, use a replacement pattern like $1 (not including tax) \$. Note that the parentheses in replacement patterns are not special characters so they do not create additional capture groups. There are only two characters that are special in the replacement text; the dollar sign “$”, and the backslash “\”. Both of these need to be escaped if they are intended to be literal. The dollar sign is a special character in regular expressions because it is used to indicate a capture group variable. Any dollar sign followed by a number is replaced by a capture group variable (if present). To avoid this, escape all dollar values in the replacement text.