SiteSpect assigns a user arriving at your site to active Campaigns that they qualify for. When a user is assigned to a Campaign, that user has the opportunity to see, but may not be included in, a particular test experience.

For example, it may be the case that the user arrives on the home page but the test focuses on a specific product page. It is also possible that this particular user may never get to that product page to see the active test. If this is the case, you do not want to count them and report on them for the Campaign since they have never been exposed to the test experience. Including them in the reporting would add unwanted noise. SiteSpect manages this using Counted settings.

There are two places you can specify this setting:

Variations within the Campaign itself can manage counting. When a variant is set to count users its When to Change (Triggers) will determine not only where the change happens but count a user into the campaign once those conditions are met. The setting is called Count users and is it located on the right hand side of each variant via a grey silhouette icon.

When a variant has a dark grey silhouette with a tick the variant(s) triggers will count users if matched.

When a variant has a light grey silhouette with a cross the variant(s) triggers will *not* count users if matched.

This is the default option for counting users in Campaigns within SiteSpect. When these conditions are met the user is counted and is included in Campaign reports since they have seen the Variation. Once  counted SiteSpect will measure their behavior against the Metrics (such as Add to Cart, Purchase Complete, and so on) included in the Campaign while it is active.

In some cases you may not want to or be able to use the Variation counting setting. In this case you can use a Metric instead to count users who see the test page or change that is applied in the Campaign. The setting is called Count users who trigger this Metric. It’s located on the Advanced Settings dialog for the Metric. To see it: 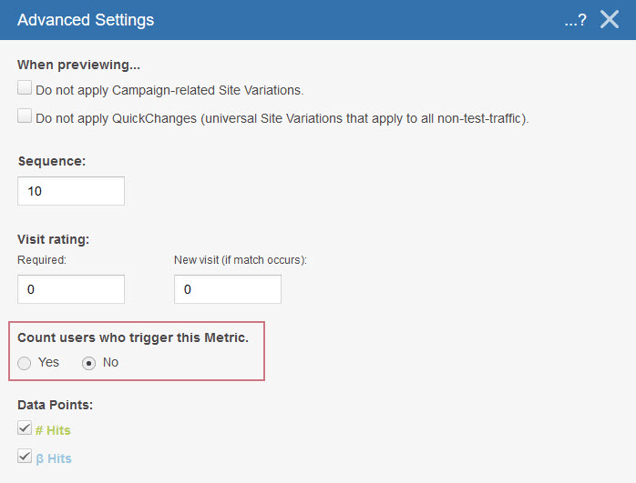 When you set the counting parameter to No for all Variations and Metrics, users who see a Variation are not counted in reporting. In special circumstances, you may want set this value to No to prevent a user from being counted even if they see the Variations. For example, if a Variation exists solely to rewrite a URL link (href) to any of several alternate target pages, the act of rewriting the URL link should not cause the user to be counted. However, in this example, we recommend creating a Variation that triggers on the target page (even if the Search Text and Replacement Text are empty), so that the user is counted.

Keep in mind that there is approximately a 45-minute data delay when you pause or end a Campaign. This means, once you pause a Campaign, you will see data trickling in for another 45 minutes or so. This is data collected for the users prior to the Campaign pause.

Q: What if a user bounces? For example, a user comes to your site and is exposed to a page with a Variation that is being tested and spends 30 seconds, but then exits. Is that bounce counted?

A: SiteSpect defines a bounce as a visit with only one page view, regardless of the length of time of the visit. This means that a user can spend 3 seconds, 30 seconds, or 3 minutes on the page; if it's the only page the user sees during the visit, SiteSpect considers it a bounce. SiteSpect counts bounces.

Additional pages to support this topic can be found below: