The SiteSpect Engine API enables testing, optimization, and targeting for server-side, client-side, mobile apps, Over-the-Top (OTT) devices, kiosks, and any other application that makes HTTP calls. You can use the Engine API as a standalone system, but it is also complementary to SiteSpect proxy and client-side SDK approaches. You can use them all simultaneously and with consistency for the same end user.

Engine API logic works in the same way as the proxy does. The user is assigned to a campaign when a request is made to the Engine API endpoint. That user can be counted in a campaign with a subsequent request. 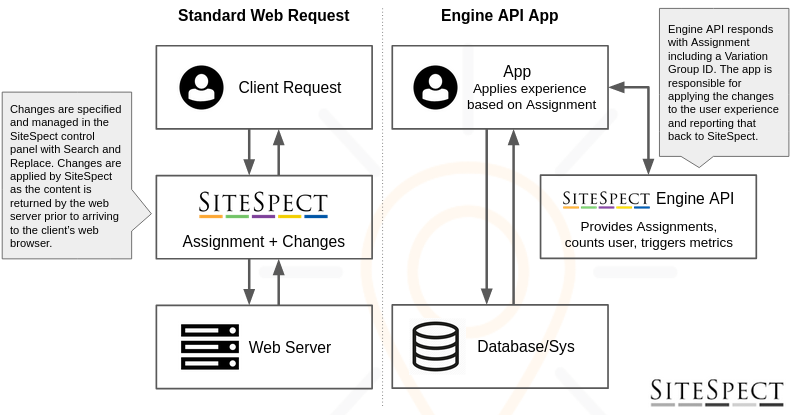 Prerequisite: If Engine API is enabled for your configuration, you should see a Campaign Set called Engine API and be able to specify the Type: Engine API when creating a new Campaign. If you don't see this option, please work with your Account Manager to request this feature.

Note: There is an option to enable Engine API from with Advanced Settings. The intent of this option is to be able to use a Campaign for both proxied traffic AND Engine API. This is a less common use case. If you want to use a Campaign dedicated to Engine API traffic, please use the above process to create a campaign that is of the Type: Engine API.

Create an Engine API Campaign from the SiteSpect Control Panel, just as you would for any other type of Campaign. Using the A/B Campaign Builder, follow these steps:

It is recommended that when new to Engine API you test it by using your favorite environment. We use curl or Postman.

The API endpoint resource typically follows the convention of the first two but can be customized:

The optional parameter ?format=array can be used to format the JSON response as an array.

Please work with our Solutions Architecture team for configuration changes.

When a user has not yet had any interaction with SiteSpect, they have no cookies. Cookies are used to track Campaign Assignment and counted status. Cookies must be used in subsequent visits so the user is properly tracked. A request with no cookies is considered a new user.

The most recent cookie values should always be used. That is, the cookie set that was returned from the most recent request should be used in the next request.

None of the Body Properties are required for subsequent POSTs after the user has been counted in the initial visit once. The act of counting makes that user "stick" and be included in the data set. More on counting in the next section.

Request headers can be used at will. These will be evaluated against Audiences and Metric Triggers.

1. Get Assigned to Campaign(s)

Send a POST with an empty body at the beginning of a new visit.

Examine the response to see which Campaign Variation groups the user is assigned to.

Users (with cookies) who were counted in a previous visit will automatically be counted in a new visit for those Campaigns. "AsmtCounted": true will be returned for each Campaign Variation Group the user was counted in in a past visit.

Campaigns where the user was not counted in a previous visit (such as newly launched) will show as "AsmtCounted": false for counted status.

Also note, as you might expect, Campaigns that have been paused or ended will no longer be represented in the response. Every time a POST is performed, the current list of Campaign Variation Group IDs will be returned along with their counted status.

Send a POST with "AsmtCounted": ["VariationGroupID"] with an array of Variation Group IDs (VGID) that you want the user counted in. VGIDs were the user is already reported as counted don't need to be included but doing so causes no harm.

Send a POST with for each Variation Group ID that the user should be part of. Optionally also send any Metric Hits at this time, and/or send them later in the visit.

When a user is counted in a campaign, it is one way - meaning the user cannot be uncounted unless they are expired out of the campaign (Advanced Campaign Settings), or the campaign status is changed to ended.

Subsequent POSTs within a visit will make no change to the counted status. These additional POSTs serve to allow for sending metric hits or extend the active visit (expires after 30 minutes of inactivity).

In this example, the user has not been counted for the Variation Group 132187. The following JSON payload will count the user.

POST JSON request payload for the user to be counted and two metrics to be hit. The Data section with Metric hits is not required, AsmtCounted is the minimum requirement for counting the user.

The "AsmtCounted" is now showing as true for this Campaign VGID.

Variation Group IDs are unique and tied to a campaign. A user will get assigned to only one Variation Group ID (VGID) per campaign as they normally do. Each VGID will return the following data every time a POST is made:

What are Live Variables

Live Variables is a JSON data layer that are managed in a Campaign or Variation Group and passed to all visits assigned to the Campaign. This allows you to specify dynamic variables that can be used in your application and changed or managed in SiteSpect. You can even use it for a mapping of Variation Group IDs to custom defined tokens that you use in the app to apply changes.

Live Variables can be used at the Campaign level and Variation Group level. They are manged in the New Build Flow either by selecting Live Variables from the three-dot menu in the upper right area of the page, or from each Variation Group. There you can insert any valid JSON data that you want to associate with the campaign. Once saved, this data will show up in the response of the Engine API POST.

Note: cookie naming can be something other than what is stated here based on your individual configuration.

Additional POSTs within a visit will allow SiteSpect to calculate visit time. If you see a visit
length of 0 in your data export, that indicates a single POST for that visit. The visit time will
represent the time between the first and last POST in a visit. A visit is automatically closed out
after 30 minutes of inactivity so additional Engine API communication can be used to extend a
visit. Conversely there is newsession boolean that can used to force a user into a new session.

There are a couple of options to test showing your changes.

*Note: there is a Campaign option called Email/Ad Testing. This feature supports using a specified URL parameter name along with the system generated Variation Group ID. When this is enabled, you can add the URL parameter to your POST endpoint URL and force the assignment to a specific Variation Group. When there is no URL parameter, the Campaign will act in a standard way and randomly split the user (even if the Email/Ad feature is enabled). Also note that when using Email/Ad Testing, a single POST will assign and count the user. You would still need an Audience to restrict assignment.


AppVG is your chosen parameter name, and 2235223 is the system provided Variation Group ID.