SiteSpect uses standard statistical methods to evaluate data. It then displays the results of that analysis on reports. This topic explains some basic information about terms from statistics and how we use them in SiteSpect.

We use statistics to determine if an observed difference between data sets is unlikely according to a certain probability threshold. SiteSpect tests a sample of the visitors to your site to see if the change you design affects conversion. In other words: it helps you understand the probability that the observed difference is due to random chance. In SiteSpect terms: what is the probability that the difference between the Control and a Variation is due to chance? SiteSpect uses a test that compares two samples: the Control and the Variation.

The z-score calculates the distance from the Control mean to the Variation mean in units of the standard error. Standard error is a measure of the statistical accuracy of an estimate equal to the standard deviation of the theoretical distribution of a large population of such estimates. 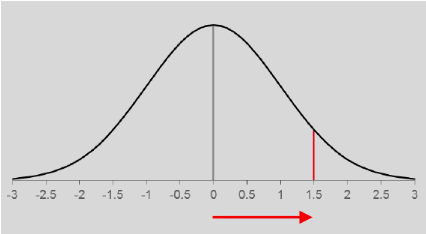 The p-value is the probability of getting a value of the test statistic that is at least as extreme as the observed test statistic by chance alone, if the null hypothesis is true. In other words, it is the probability of wrongly concluding that there is a difference between groups when, in fact, there is no difference. In this example, at 1.5 standard deviations above the Control mean, there is
approximately 13.4% probability that the difference compared to the Control is due to chance alone.

The p-value that is commonly used as the threshold is 0.05, which means that we are willing to accept a 5% probability of declaring one group to be different from the other when there is no true difference (false positive). This equates to a 1 in 20 chance

If the p-value associated with the test statistic is less than the p-value that you’re using as the threshold (e.g. 0.01, 0.05, or 0.10), then we reject the null hypothesis and accept the alternative hypothesis.

SiteSpect uses a two-tailed t-test when comparing Variations against Controls to determine the point at which confidence intervals do not overlap and thus indicate significance . SiteSpect also computes the z-score and uses it in reports

SiteSpect uses the results of the two-tailed t-test as the basis for the Confidence Indicator bars in the Performance Matrix. We calculate confidence intervals using a z of 1.64485 (for “90%”, shown as one red/green bar), 1.95996 (for “95%”, shown as two red/green bars), and 2.57583 (for “99%”, shown as three red/green bars) of the Variation vs. the Control. For main effects, SiteSpect does this once for each pair of a Factor’s Variations vs. its Control. For interaction effects, SiteSpect does this once for each pair of an entire Variation Group vs. the Control Variation Group. For each of these comparison tests, SiteSpect looks for whether the entire interval is below zero or above zero (hence two-tailed), and if so, it is considered significant at the given z.

Lastly, SiteSpect displays Confidence Plots, which are basically a visual comparison of confidence intervals with a z of 1.281552 (equivalent to an “80%” level of significance.) Notably, when intervals at this level reach the point of being non-overlapping (the highest value for the Control is lower than the lowest value for the Variation, or vice versa), it is equivalent to a p of 0.05 (95% confidence).