SiteSpect's Export and Import features allow you to export SiteSpect objects from one SiteSpect Site and then import them into another SiteSpect Site.

Export / Import features allow you to transport objects from a source Site to a target Site. For example, you may want to create some objects on a staging Site and test them out there and once you have refined them, import them to a production Site. You can develop a Campaign (including its Factors, Variations, Metrics, Audiences, Page Categories, and Site Variations) on a staging system, validate that everything is working correctly, and then export the Campaign (including all of its components) to a file. You can then import the file into the production system and make the Campaign Active.

There are two types of exports:

When you perform a Campaign export, you can select to export specific Campaigns from your Campaign list. The export includes all Factors, Variations, Metrics, Audiences, Page Categories, and Site Variations that are associated with the selected Campaigns. Note that Campaign results data (i.e., user/visit data) is not exported.

Note: Subsequent exports from the same source that are imported to the same target update the original Campaign (instead of creating another Campaign) and purge any existing results data from the target's Campaign.

When you export components, you can select to export individual Factors, Variations, Metrics, Audiences, Page Categories, and Site Variations.

Note: Subsequent exports from the same source that are imported to the same target update the original objects; they do not create new ones. 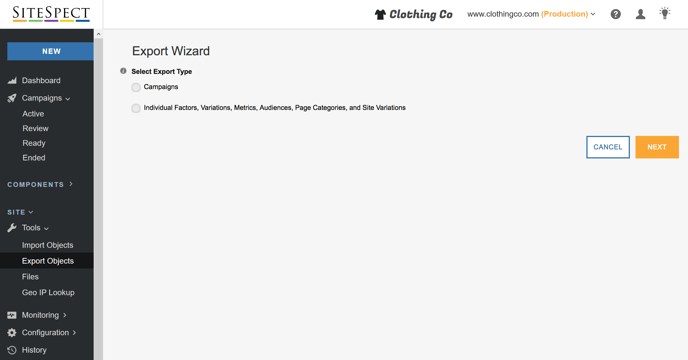 Objects that have dependencies list the dependent object on the same row and provide its ID.

Importing allows you to upload a file that was exported from a different SiteSpect Site into the currently selected Site. Importing objects into the same Site is not allowed. Importing is based on the following set of dependencies and rules. 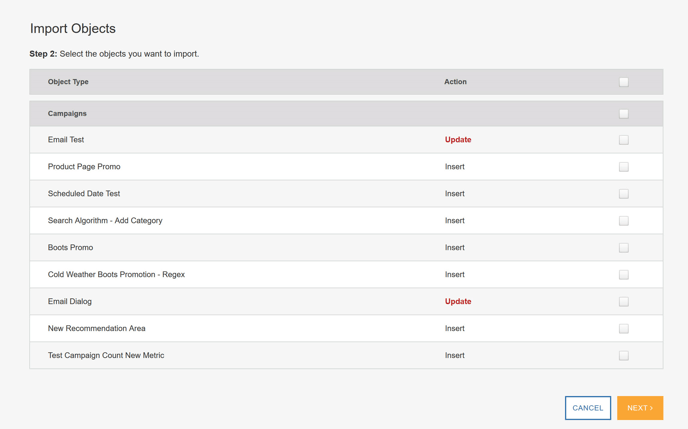 After you click Next, a list of components that belong to the Campaigns you are displayed. Select the components you want to import and click Import.
Note: With a Campaign where the same Metrics and or Audiences already exist on the destination site, ensure that they are not checked during the import step showing components, instead re-add them manually after the import is complete. This prevents duplication of those Metrics or Audiences.