The Status of a Campaign tells you what's happening with it at this particular moment in time. Campaigns are automatically placed in Review mode upon creation. During Review, a member of your team can QA the Campaign before making it live. Once QAed, a team member can set it to run by changing its Status to Active or let it begin running according to its Start Time.

In some work flows, the Campaign Administrator is responsible for setting a Campaign to Ready, which queues it up to go live later. From this point on, all visitors with non-administrator privilege levels, including Campaign Builders no longer have privileges to edit the Campaign.

You may want to edit the Status of a Campaign if:

To change the Status of an existing Campaign: 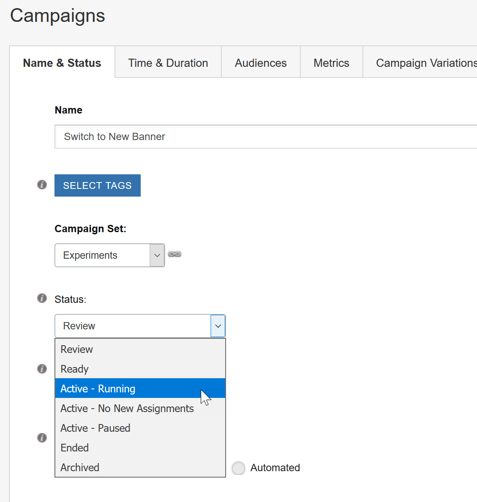 The following are the possible Statuses:

Review – The Campaign has been created, but it has not been turned on. This is essentially a QA state. You may want to use this Status if you are still fine-tuning the Campaign or if you are waiting for approval to run it.

Ready – The Campaign has been created, but it has not been turned on. You may want to use this Status if you are still fine-tuning the Campaign or if you are waiting for approval to run it. This Status is available at any permission level except Campaign Builder.

Active - Scheduled – The Campaign has been turned on, but its Start Date is at some point in the future. Once the Start Date arrives, SiteSpect automatically turns on the Campaign and changes its Status to Active - Running.

Note: This Status does not appear on the Status drop-down list on the Name & Status tab of the Campaign because it is controlled solely by the Start Date.

Active - Running – The Campaign is running.

Active - No New Assignments – The Campaign is running but it is not accepting new visitor assignments. Visitors who have already been selected to see the Campaign continue to see it, but no new visitors are assigned.

Note: This Status does not appear on the Status drop-down list on the Name & Status tab of the Campaign because it is controlled solely by SiteSpect.

Ended – The Campaign has stopped running. The results of the Campaign are final and you can create reports to evaluate them.

Archived – The Campaign is not running. Once you change the Status of a Campaign to Archived, you cannot change it back. In addition, SiteSpect automatically changes the Status of your Campaigns to Archived when they have been in an Ended state for a period of six months. SiteSpect allows you to run reports on Archived Campaigns, but doesn't allow you to change their Status.

At some point, you may want to change the Status of a Campaign: to pause it for QA after a site release, or to end it after it has finished. When you change a Campaign’s Status, keep in mind the following considerations.

However, if you switch the Status of a Campaign from Active – Running to Ended, SiteSpect releases visitors from the Campaign on their next page view, when they then may be assigned to a different, competing, Campaign.

If you need to stop showing a particular experience now but may want to make it live again in the future, we recommend switching it to Active – Paused.